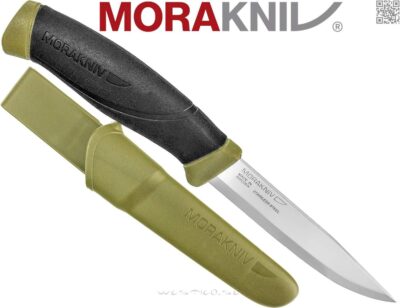 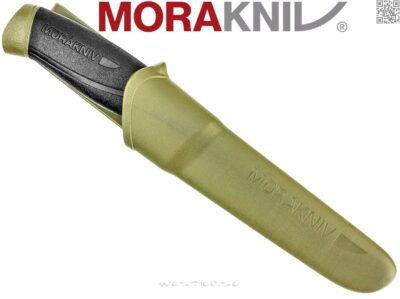 Is a martensitic stainless chromium steel with an optimized analysis for high quality
professional knife applications. After heat treatment, the composition of carbon and chromium gives a unique
combination of properties including:

Morakniv has been part of the Swedish handicraft tradition since 1891. The knives are made at the factory in Mora, Sweden with the traditions and knowledge that has gained over the years. Each knife is manufactured to the highest standards and will last for a lifetime. Morakniv is proud and well known for high quality. Customers shall feel confident in buying a Morakniv and that it will last for a long time under tough conditions.

The Swedish Armed Forces (Swedish: Försvarsmakten, "the Defense Force") is the government agency that forms the armed forces of Sweden, tasked with the defense of the country as well as with promoting Sweden's wider interests, supporting international peacekeeping, and providing humanitarian aid. It consists of the Swedish Army, the Swedish Air Force and the Swedish Navy, as well as a military reserve force, the Home Guard. Since 1994, all Swedish military branches are organized within a single unified government agency, headed by the Supreme Commander, even though the individual services maintain their distinct identities. The Swedish Armed Forces is made up of 23,600 active personnel, 11,200 military reserves, 24,000 Home Guard and 5,200 additional conscripts yearly into the Reserves(set to increase to 8,000 conscripts yearly by 2024) as of 2022. Units of the Swedish Armed Forces are currently on deployment in several international operations either actively or as military observers, including Afghanistan as part of the Resolute Support Mission and in Kosovo (as part of Kosovo Force). Moreover, Swedish Armed Forces contribute as the leading state for a European Union Battlegroup approximately once every three years through the Nordic Battlegroup. Sweden has close relations with NATO and NATO members, and participates in training exercises like the Admiral Pitka Recon Challenge, and Exercise Trident Juncture 2018. Sweden also has a strong cooperation with its closest allies of the Nordic countries being part of the Nordic Defence Cooperation and joint exercises such as Exercise Northern Wind 2019. Sweden has not participated in an officially declared war since the 1814 Swedish–Norwegian War, although its forces, under the UN flag, have been involved in conflicts like the Congo Crisis and the military intervention in Libya. The Swedish government has managed to keep Sweden out of war through a policy of neutrality. The Swedish army has 121 tanks (Leopard 2A5/Strv 122), roughly 1,300 APCs (Patria XA-360/203/180, RG-32 Scout), 800 IFVs (550 CV9040, 150 Bv410, 90 Bv308/309) 11,300 utility vehicles (ex. Bv206/208, MB G-Class 6x6 and 4x4, MB sprinter), 84 towed and 40 self-propelled mortar (12 cm grk m/41, grkpbv90) and 48 self-propelled artillery guns (Archer). It also consist of several different specialized vehicles. The Swedish Navy has a total of 387 ships, including 5 submarines (3 Gotland, 2 Södermanland), 7 corvettes (5 Visby, 2 Gävle), 9 minesweepers (4 Koster, 4 Styrsö), 13 larger patrol boats (2 Stockholm and 11 Tapper) and 9 specialised ships with different support duties. The rest is made up of different smaller vessels such as the CB90. Currently the Swedish Airforce has a total of 210 aircraft, 94 of those being JAS39C/D Gripen (60 JAS39E on order), 6 C130H Hercules (1 with aerial refueling capabilities), 4 SAAB 340 (2 AEW&C and 2 VIP transport), 4 Gulfstream IV (2 SIGINT and 2 VIP transport) as well as 15 UH-60 Blackhawk and 18 NH90 helicopters. The rest is made up of different transport and trainer aircraft. After a period of enhanced readiness during World War I, the Swedish Armed Forces were subject to severe downsizing during the interwar years. When World War II started, a large rearmament program was launched to once again guard Swedish neutrality, relying on mass male conscription to fill the ranks. After World War II, Sweden considered building nuclear weapons to deter a Soviet invasion. From 1945 to 1972 the Swedish government ran a clandestine nuclear weapons program under the guise of civilian defence research at the Swedish National Defence Research Institute. By the late 1950s, the work had reached the point where underground testing was feasible. However, at that time the Riksdag prohibited research and development of nuclear weapons, pledging that research should be done only for the purpose of defence against nuclear attack. The option to continue development was abandoned in 1966, and Sweden subsequently signed the Non-Proliferation Treaty in 1968. The program was finally concluded in 1972. During the Cold War, the wartime mass conscription system was kept in place to act as a deterrent to the Soviet Union, seen as the greatest military threat to Sweden. The end of the Cold War and the collapse of the Soviet Union meant that the perceived threat lessened and the armed forces were downsized, with conscription taking in fewer and fewer recruits until it was deactivated in 2010. Sweden remains a neutral country, but has cooperated with NATO since the Partnership for Peace in 1994. Sweden was one of five partner nations granted the status of Enhanced Opportunities Partner at NATO's Wales Summit in 2014, coinciding with Russia's illegal annexation of Crimea and intervention in Ukraine. The Russo-Georgian War of 2008 and the events in Ukraine in 2014 gradually shifted Swedish debate back in favour of increased defence spending, as concerns grew over Russia's military buildup and intentions. Conscription was reintroduced in 2017 to supplement the insufficient number of volunteers signing up for service. Unlike in the past, the current conscription system applies to both men and women. Following the United Kingdom leaving the European Union in 2020, the EU's mutual defence clause (Lisbon Treaty Article 42.7) ceased to apply to the UK. In 2022, Sweden and the UK signed a mutual security deal, re-pledging support if either state is attacked. On June 29th, 2022, Sweden along with Finland was formally invited to become a member of NATO.