G&G is a Taiwanese manufacturer of airsoft guns, operating on the airsoft market since 1986. Every – even a novice – airsoft enthusiast knows this brand very well, as it enjoys great popularity in the airsoft community. Its airsoft guns are characterized by high quality – and at an affordable price, which is why they are used by both people who are just starting their adventure with airsoft, as well as experienced players.

G&G Armaments – since 1986
The manufacturer launched its operation in the 1980s, operating at the beginning under the name Guay Guay Trading Co. Ltd. The company has always been involved with supply of airsoft guns and broadly understood military equipment, but their own brand, currently known all over the world, was launched in 2001. It was then that the production of various types of airsoft guns, as well as parts and accessories, was began. These days G&G offers over 100 different models of airsoft guns, and their portfolio is constantly expanding.

What type of airsoft guns can we get from G&G?
The G&G brand offers various models of airsoft weapons. Both long firearms, assault rifles, sniper rifles, submachine guns and shotguns, as well as revolvers and pistols. As for airsoft carbines, this category is dominated by AK or M4 – type constructions, but it also includes such gems airsoft rifle lines that imitate models used by the armies of individual countries. An example is the M14 EBR airsoft assault rifle, used by the United States Army.

G&G specializes mainly in electric airsoft guns, characterized by high quality and very good reproduction of the look of their firearm counterparts. They not only look great, but also work efficiently, because the manufacturer uses only high-class components. Individual models can be used in airsoft games of a different nature. Among them you will find airsoft guns that perform best at short distances and in CQB games, such as the Fire Hawk carbine, or the GC16 Predator airsoft rifle – for medium-range operations.

Other G&G airsoft products
The G&G offer is very extensive and includes not only airsoft guns, but also spare and tuning parts, such as the G&G Hop-Up rubber. You also have a choice of many accessories, as well as elements of tactical equipment produced by this company. Thanks to this, you will complete your entire G&G airsoft shooting kit, which will not only consist of a complete airsoft gun, but also protective glasses and G&G BBs.

G&G – airsoft wouldn’t be the same without them!
G&G is a recognized manufacturer of airsoft equipment – not only because of its long history of operations or manufacture of high-quality airsoft guns. The company also uses modern solutions that make its airsoft guns even more comfortable in use and guarantee their great performance on the battlefield. Following current trends and keeping in constant contact with the airsoft environment allows G&G to design constructions answering the current market demands. As a result, you are guaranteed equipment that will meet your expectations. 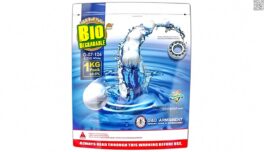 215,00 kr
High quality steamless BB’s made by G&G and is biodegradable. Biodegradable BB’s decompose your self after 3-4 month in dump environment.
Läs mer+ Lägg till i offert