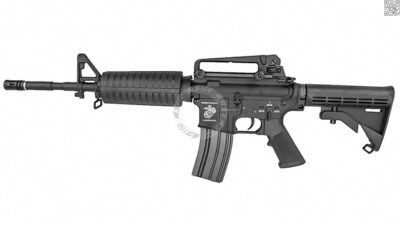 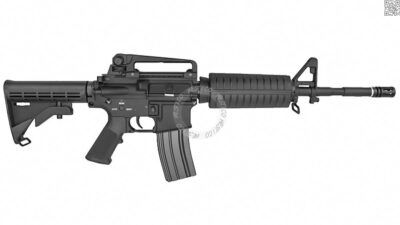 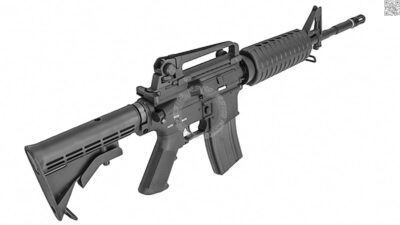 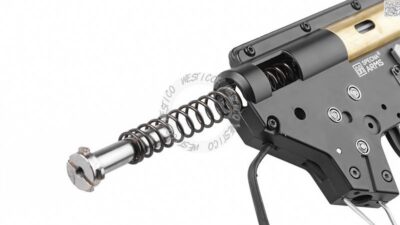 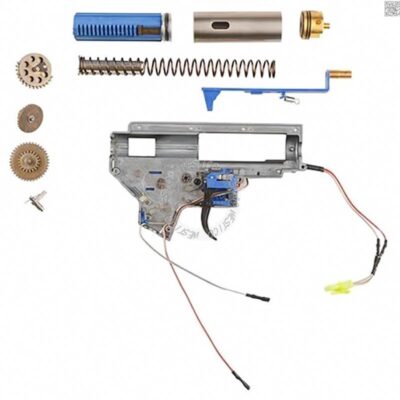 ENGLISH:
The Specna Arms brand SA-B01 carbine rifle made predominantly of an homogenous alloy of zinc and aluminum with the use of steel elements in the most neuralgic points of the rifle ( the screws, the pins and the tactical sling attachment points are made of steel ). The SF type stock which holds the battery and the pistol grip were made of polymer plastic. The rifle’s body, the RIS rail set were a subject to the process of anodizing what guaranties a high level of protecting the rifle against corrosion. The paintjob of the rifle itself was made using the pulverization method after a previous sandblasting of the rifle’s surface. This ensures the paint’s higher, than usually, durability against abrasion. The rifle’s body beads the USMC markings.

The rifle was fitted very well – in a way that it was previously observable only in the G&P or Classic Army class rifles. It was also perfectly balanced. This ensures a perfect maneuverability of the rifle while as its weight is almost not felt when you place the rifle on the shoulder.

The rifle uses a quick main spring exchange system, the so-called Enter & Convert™. This allows for a quick and fluent adaptation of the rifle’s power to the conditions of the battlefield without the need of having access to a workshop or a number of specialist tools – when you take the gearbox out the rifle’s body, the process of exchanging the main spring takes literally seconds.

The advantages of the Enter & Convert™ system are hard to overestimate. In the light of the laws existing in Europe and which limit the muzzle velocity of the rifle and the establishments inside the airsoft society, this system guaranties the user great possibilities and more liberty. The Enter & Convert™ system allows to change the main spring in little amount of time, and, what is followed by this, adapted the muzzle velocity of the rifle to the battlefield so it guaranties a perfect compromise between effectiveness of firing and the safety of your own and other players.

The rifle was fully adapted to cooperate with LiPo and LiFe type batteries. Thanks to the basic muzzle velocity of about 410 FPS which is guaranteed by the default main spring, the rifle is perfect to be used in middle distances. The set also includes an M90 main spring which allows to decrease the muzzle velocity to about 310 FPS making the rifle perfectly adapted for short range operations or fighting inside buildings.

The Upgraded Version is equipped with some new, improved internal parts:

The rifle is equipped with a top 22mm RIS rail, a set of front 22mm RIS rails and an adjustable stock. The top RIS rail holds the flip-up type iron aiming sights which can be easily detached and replaced with any optical-electronic aiming devices. Thanks to the collapsible stock which is ended with a anti-skid stock’s foot, it is possible to adapt the rifle’s length to the built and the preferences of the shooter. The default muzzle flash-hider is placed on a 14mm counter-clockwise thread what allows the attachment of a sound suppressor in its place.

In order to increase the realism level, the rifle was equipped with a functional bolt catch lever.
The rifle set also includes a steel hi-cap type magazine which holds 300 BB pellets.

The set does not include the battery nor charger.

Specna Arms is a popular manufacturer of airsoft guns, based in Hong Kong. Their portfolio also includes parts, Specna Arms BBs, airsoft gun accessories, as well as a wide range of military and tactical equipment, such as uniforms. They are one of the most recognizable brands on the airsoft market, with a long history of providing high-quality products for airsoft fanatics. Specna Arms equipment has been tested by thousands of users, guaranteeing that they offer some of the best airsoft guns and accessories available on the ASG market. The wide range of airsoft guns manufactured by the company is divided into particular product lines, among which we can distinguish the polymer Core line, the innovative Edge series, or the One series, with the widest selection of models. Everyone is guaranteed to find something to their satisfaction - regardless if you are just starting your adventure with airsoft, or are an experienced airsoft player. Specna Arms airsoft guns Specna Arms offer - first and foremost - electric assault rifles, based mainly on the AR15 design. These will prove themselves mainly in combat in open terrain, where long range is necessary. If you seek even longer range, because - for example - you specialize in sharpshooting, Specna Arms also offers airsoft sniper rifles. Their offer is organized by airsoft gun series, each of which has characteristic features related to the construction and additional functions. The most popular series of Specna Arms airsoft guns Specna Arms airsoft guns feature various types of systems for quick spring replacement: Enter & Convert (as in the Specna Arms SA-B01 ONE ™ airsoft gun), SAEC, or ESA - all proprietary designs of their manufacturer. Some models are also equipped with electronics from the Gate company, allowing greater control and use of all its possibilities. You can also count on reinforced gearboxes, precision barrels, a unique Specna Arms design magazine and many other features, as well as mechanisms characteristic of this manufacturer, such as the Specna Arms V2 gearbox. The confirmation of the high quality and innovation of the company’s products is the licensing of Specna Arms airsoft guns by the American firearms manufacturer - Rock River Arms. SPECNA ONE It all began with the ONE line - the origin of the Specna Arms brand. It has been improved and modified over the years, and the result is a very precise refinement of the airsoft guns belonging to this series. A durable gearbox, Enter & Convert and SAEC quick spring replacement systems, a full metal body, a very wide range of models and great quality of workmanship - these are the features of the ONE series, known and appreciated for many years. You can find them in the Specna Arms SA-B02 ONE ™ airsoft rifle, Specna Arms HK416 (SA-H11 ONE ™) or Specna Arms SA-B04 ONE ™. Specna Arms EDGE 2.0 The EDGE AR-15 series is the latest AEG line of airsoft guns in the Specna Arms catalog, which should meet the expectations of even the most demanding shooters. These airsoft assault rifles were produced under the license of the American firearms manufacturer Rock River Arms and come equipped with the GATE technology. The EDGE 2.0 series takes the Specna Arms brand to a higher level of realism and performance. Its model examples are the SA-H23 EDGE 2.0 ™ or the SA-H22 EDGE 2.0 ™ airsoft assault rifles. G-SERIES A line of airsoft guns from the EDGE series, featuring a polymer body. This is, of course, a nod towards realism, bringing the series closer to the real firearm. Realism is also added by the installed EBB system, which can be easily deactivated if necessary. Inside the G series you will find a reinforced gearbox with a micro-contact, extending the life of the electrical system. The wide range of models in the G series will allow each of you to choose something to suit your fancy - from small arms, ideal for CQB games, to rifles with integrated optics for long-range combat. Specna Arms CORE The CORE line is an extraordinary series of airsoft guns, that contributed to a real revolution on the airsoft market. They meet the needs of shooters who seek good quality equipment at an affordable price - which is what the CORE line provides. The combination of an attractive price, an innovative spring replacement system and high-quality materials make those airsoft guns perfect for both beginners and experienced users. Just like the SA-C08 CORE ™ airsoft rifle or the SV-98 CORE ™ airsoft sniper rifle. Other parts and accessories from Specna Arms The company's offer is comprehensive and its goal is to provide you with all the elements you need for your airsoft activities. Specna Arms also presents a wide range of high-quality internal parts for airsoft guns. Gears, pistons, cylinders, nozzles, gearbox bodies and many other parts that allow you to make small repairs or perform tuning by yourself. Thanks to this, you will be able to achieve maximum performance from your Specna Arms® airsoft gun. This brand never stands still. It is constantly developing and improving its products to provide you with optimal and even the best solutions in the field of airsoft.